Our consultants David Kiss and Sam Green-Clarke decided to go and have a rather cheesy lunch. This is what they thought!

David: The Cheese Truck on Festivals and Maltby Street market, The Cheese Bar in Camden or the Pick&Cheese at the most recently opened Seven Dial Market (by Kerb) in the Heart of our beloved London. Different names but 1 person connects all 3 of them together: Mathew Carver, who came up with the names and ideas to begin with a good 5 years ago. All started with a very simple idea of promoting great British produce: cheese. What better way it would be other than squash as much delicious cheese as much you can between two buttery pieces of bread and grill them into a gooey, melted beauty?! 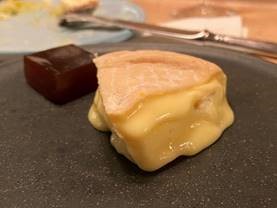 Without going into too much detail, the Cheese Truck quickly became one of the most popular food trucks at any major festival in the UK and The Cheese Bar was the next step for the company in Camden to put the whole idea between brick walls, literally. Needless to say, great success with amazing feedbacks and sometimes 1 1/2 hour waiting list just to get a table at the Heaven of British Cheese.

Success after success there was no slowing down neither with the ideas or with the ambition of the next location.

Seven Dials market opened in the pumping heart of London just a stone’s throw away from Covent Garden at the brand new Seven Dial Market which is just got a brand new image, face lift and a whole new wave of Street Food born traders full of energy and, yes, you guessed it, Mathew is one of them! 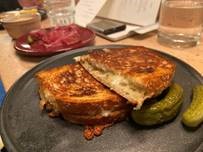 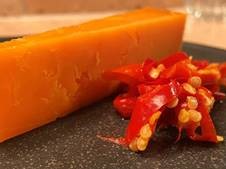 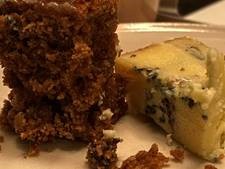 Sam: I’d been meaning to visit Cheese Bar since I first heard rumours of their famous Grilled Cheese Sandwich (Cheddar, Cornish Gouda, British Mozzarella and Stilton topped with Caramelised Onions if you’re wondering) but never quite made it down.  In retrospect that was a huge mistake as it turns out I should have been going on a weekly basis at the bare minimum. When my colleague David Kiss, who has worked with Mathew Carver in the past, suggested we pop down to the new site Pick & Cheese in Covent Garden for lunch I didn’t need much convincing.

Pick & Cheese is the second site (for now) in Carver’s growing cheese empire, and it’s definitely not just a carbon copy of the first. Set in an award winning, custom built space in Seven Dials market, it takes inspiration from Japanese Sushi restaurants in its layout and service style. It features a dual direction conveyer belt ferrying more than 25 different cheeses in a continuous circuit across the entire restaurant paired with such diverse accompaniments as Garlic & Thyme Roasted Beetroot or Rosemary Shortbread & Honey, tempting you to always want just one more plate.

In addition to the on-belt dishes, beautifully presented and priced on handmade colour coded plates, Pick & Cheese offers chef prepared items such as their incredible Grilled Cheese sandwich, aka the best Grilled Cheese I’ve ever had in my life and the Angloumi Saganaki. Pan fried with honey, fresh oregano and lemon the perfectly cooked firm texture gives way to a fresh burst of flavour that will haunt my dreams.

With so many options it was hard to narrow it down to just a few. We started with the Drunken Port-Infused Stilton paired with Christmas Cake, the rich sweetness of the port melding perfectly with the creamy stilton and the subtle spicy undertones of the cake.

The Sparkenhoe Red Leicester was a standout for me. The natural heat of the cheese was complimented and enhanced by the mingled sweetness and fire of the accompanying candied chilli pepper.

David:   Naturally if you do something over 100 times and you like it that way, you think it just can not get better…well that’s not the case with the grilled cheese sandwich at P&C. Instead of promoting 1 type of cheese, this one has got 4 different including: cheddar, gouda, mozzarella and stilton and a touch of caramelised onion to compliment all of these melted goodness…and God bless it because it does. Amazing combination of tangy, sweet and salty aged cheddar with the crisp outskirt of the great quality sourdough bread.

Baron Bigod has been the absolute favourite cheese of mine since I first tasted it. If you want to explain the flavours it’s just like talking about a M. Night Shyamalan movie that has something different to say for everyone and every time you try it there is something new to discover.  So creamy, so complex and good to know that it is the only unpasteurised British “brie” type cheese.

Rollrigth could have been my greatest enemy after processing over 100kg’s it over the Taste of London Festival but hey there is something about the meaty and deeply savoury flavour you just can not afford to dislike or even ignore. I remembered very well this cheese from 2017 but as it turns out the dairy changed their cows and the environment slightly and guess what….it got even better! If you think a piece of cheese can not get any creamier you have to try this superbly matched with braised leeks.

Renegade Monk is the cheese where we going to have the big love or hate decision. Obviously I love it but that’s me, a notorious dairy fan; show me someone who loves dairy more than I do and I’ll buy you a beer! Coming from Somerset, homeland of great British dairy, this one is truly for the “smelly cheese heads” to quote Mathew. A wash rind cheese with seriously pungent smell and taste with a hint of blue cheese notes. What else would you pair this strong taste other than a classic British Earl Gray tea jelly which is just the right comfort on your palate with something perhaps even more dividing than a general election.

Sam: You would be forgiven for thinking that cheese was the only thing on the menu, but this was definitely not the case. A plate of Bresola caught my eye as it was carried along the belt and I was not about to let it escape. Hereford beef, locally sourced then cured in coffee and salt brought a South American taste to the proceedings, served with cornichons which crisp acidity cut through the rich flavour of the meat.

We would have been amiss had we not tried some of the selection of natural wines to go with our cheese and one of the orange wines caught my eye. A glass of the 2016 Benimaquia Tinajas was the perfect side to our meal, the fruity sweetness of the Moscatel grapes giving way to a natural zesty finish.

While we gave a good account of ourselves, by the time our stomachs were full we still had so many other fantastic options to try. Full disclosure: the writing of this review got us both so worked up that upon finishing we had no choice but to head back to Pick & Cheese for a second visit. That review to follow…

We use cookies on our website to give you the most relevant experience by remembering your preferences and repeat visits. By clicking “Accept”, you consent to the use of ALL the cookies.
Cookie settingsACCEPT
Manage consent

Any cookies that may not be particularly necessary for the website to function and is used specifically to collect user personal data via analytics, ads, other embedded contents are termed as non-necessary cookies. It is mandatory to procure user consent prior to running these cookies on your website.

SAVE & ACCEPT
Go to Top