Steak, Popcorn and Lion King – What more could a girl want??! (by Georgia Stevens)

Steak, Popcorn and Lion King – What more could a girl want??!

When you think about going to the cinema, the first thing that pops into most of our heads is sticky carpets, uncomfortable chairs, penny sweets (that aren’t a penny anymore!) and the people serving you aren’t the happiest in the world… well, take that image and throw it away – be gone with it!

On a rainy Saturday evening, myself and the partner decided to go crazy and go for a bite to eat followed by a trip to Everyman Cinema to see the one and only Lion King… the question was, “where to go?”

Wanting to venture out, we found an Argentine Steakhouse called Buenasado in Walton on Thames that that work along suppliers that source all their produce from the farmers in Las Pampas. Once agreed that we would only have a main to save room for popcorn – it all went horribly wrong… I saw the starters!

After our Kings prawns in a white wine, lemon & garlic sauce – out came the steaks… oh boy! I opted for the Ribeye and my partner went for the Fillet and for two chatter boxes, we were strangely quiet.

Again, we decided that no desserts were needed, but then we saw the Chocolate Torte and Dolce de Leche Banoffee Pie…

Only one word can describe Buenasado, wow.

We then made our way across to Everyman Cinema which has become something of a monthly occurrence. Remember the start of this story when I told you to throw away the initial image of a cinema? This is where that comes in to play… let me give you a new image!

There is something about Everyman Cinema that gives you that fuzzy feeling of joy – you are greeted by smiling staff asking you how you are and what film you are here to see, they then direct you up to the bar where the walls are covered in old classic movie posters – complete with an extensive wine list, beer, ale, spirits and cocktails (the Passionfruit Daquiri is a must!).

Before heading on into the movie, you can order food; from Pizza’s that they make there to Hummus and Salads to then be followed by one of their scrummy cakes or build your own Sundaes. This is all brought to you once cooked. 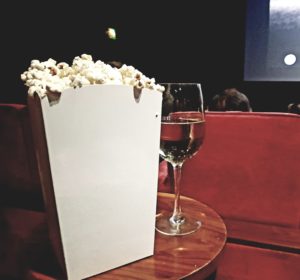 Upon entry, you are already relaxed and feel at home but then you go to take your seat… or should I say sofa?! Yes, they have sofas for you with scatter cushions to get comfy and enjoy the film. Before the film starts, a member of the team will come in and introduce the film, explain that the bar is still open and wish you a great time – let’s be honest, its these little touches that we all notice and appreciate.

The lights went down, popcorn in hand, the moment this Disney super fan had been waiting for… The Lion King! Our whole evening leading up to this moment had been simply perfect and amazing just like the film.

Everyman Cinema – you are my favourite date night!